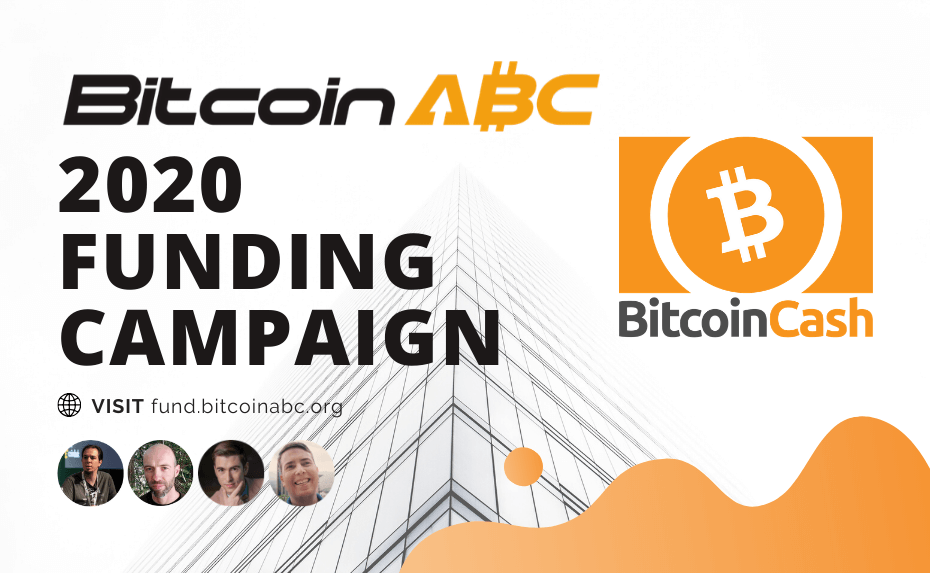 The team is focused on scaling Bitcoin Cash to serve billions of daily users as “censorship-resistant peer-to-peer electronic cash for the world.”

Bitcoin ABC aims to raise USD$3.3 million, or about 14,500 BCH, to fund its operations through the end of April 2021. The team is offering several methods of funding, including: individual, small business and corporate sponsorships; funding buckets for specific development projects; and direct donations.

The development team has released a 26-page business plan with a detailed budget and a timeline of deliverables that the public can download from https://fund.bitcoinabc.org.

The team has already made significant progress towards its fundraising goals over the last 5 weeks through an outreach initiative to Bitcoin Cash companies that is led by recent hire and Business Development Manager George Donnelly.

“With the financial crisis looming, the importance of digital cash will become more critical than ever before. Bitcoin Cash has the best chances to make this a reality, and the window of opportunity is now. However, Bitcoin Cash’s infrastructure has been underfunded, which has led to brain drain and long standing issues left unaddressed. If the situation doesn’t change, then Bitcoin Cash might see a once-in-a-decade opportunity pass by without seizing it,” said Bitcoin ABC Lead Developer Amaury Séchet.

A press kit, including translations of this press release, is available at https://fund.bitcoinabc.org.

Bitcoin ABC Lead Developer Amaury Séchet led the fork of Bitcoin Cash from Bitcoin Core in 2017 and has grown the team since then to encompass world-class talent in multiple fields.

Amaury Séchet founded and leads Bitcoin ABC. He stood up and took responsibility to make the Bitcoin Cash fork from Bitcoin Core happen in 2017. Mr. Séchet discovered Bitcoin in 2010 and got involved in 2011. Seeing Bitcoin failing to scale, he decided to take matters into his own hands and apply his experience in large-scale systems to Bitcoin. Mr. Séchet is formerly a software engineer at Facebook, LLVM committer and the main developer of the D compiler SDC.

All Bitcoin holders as of block 478558 are also owners of Bitcoin Cash. All are welcome to join the Bitcoin Cash community as we move forward in creating sound money accessible to the whole world.