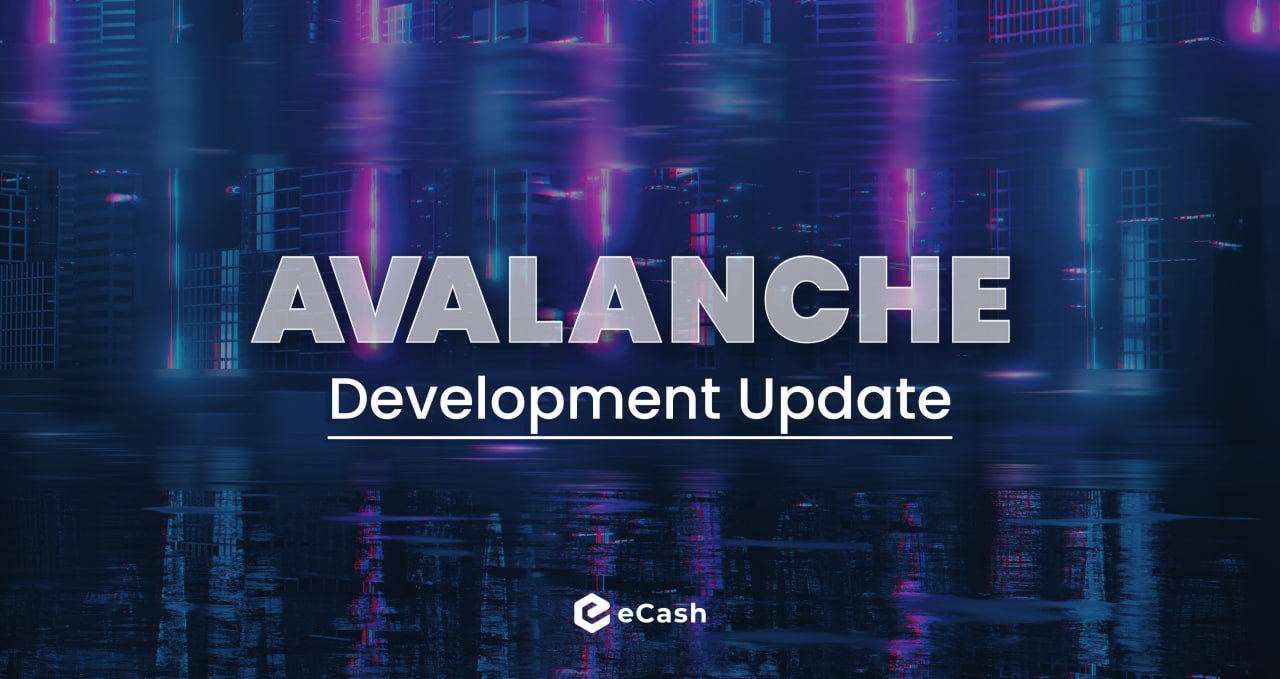 This article is to bring people up to date on what’s been achieved, and what’s been happening in our development activities on Avalanche for eCash, since the previous update from early May 2022.

The two primary advancements since the last update were:

As context for understanding these developments, it may be helpful to explain how the networking requirements for the Avalanche protocol differ from traditional Nakamoto consensus.

For Avalanche consensus, on the other hand, the node needs to be well connected to the network. This means that the node should have connections to nodes representing the vast majority of stake on the network. This is because the security model of Avalanche consensus involves randomly polling nodes from the entire set of valid nodes. It can be thought of as random sampling, with a different set of random nodes for each round of polling.

(It should be noted that the random sampling is weighted by the amount of staked coins associated with the node. A node with twice the stake will be “sampled” twice as often, on average, as a node with half that amount of stake.)

In the eCash Avalanche protocol, the set of stakers are represented by “Proofs”. These Proofs contain signatures from the staked coins that delegate authority to one or more nodes on the network, via a public key. This means that the set of valid Proofs represents the entities that are participating in the Avalanche protocol, and we call these “Avalanche Peers”. Note that Avalanche Peers can delegate their authority to several physical nodes. This can be done for technical reasons: to spread the load across nodes, and for redundancy.

Because of this, we can see that it is important for the nodes to be able to reliably obtain the full set of Avalanche Proofs.

Because having a complete set of Avalanche Peers is an important security parameter for Avalanche, a more robust method of obtaining Proofs from other nodes was needed. This is what the “Compact Proof Request” mechanism provides.

Prior to the implementation of Compact Proof Requests, the nodes shared Proofs using a method similar to transaction propagation. For anyone who has used 0-conf transactions, this tends to work well enough that all nodes typically receive any transaction that’s broadcast. But it’s not good enough for the network requirements of Avalanche, especially when considering the case of a bootstrapping node, which needs access to Proofs that may have been originally broadcast far earlier. The protocol needs a way to explicitly request other nodes for a list of all the Proofs they have, and then fetch those Proofs.

Essentially, the way the Compact Proof Requests work is they simply send the request to a node on the network, and this node replies with a list of “short IDs” of the Proofs they have at that time. The “short ID” part of the code is similar to the “Compact Blocks” code, and re-uses that implementation. This is a bandwidth-efficient way to transfer the information over the network.

Another detail of this protocol that you may notice, is that it uses RCU (Read Copy Update) pointers within a Radix Tree to keep track of the Proofs. When the responding node sends the list of short IDs, it also takes a snapshot of the Proofs at that time. RCU pointers make this snapshot more efficient by not actually making a copy until the original is updated (which it often won’t be). Taking a snapshot in this way will ensure that the responding node still has all the Proofs in the list if/when the requesting node asks for them. Since Proofs can be replaced, or be dropped by the node for other reasons, it keeps the protocol simpler if the node can always respond with the Proofs that are requested (rather than have other special cases, such as telling the requesting node it doesn’t have that Proof anymore for some reason).

In summary, the Compact Proofs Requests facility is a robust and efficient way for nodes to request Proofs from other nodes on the network.

The following is a partial list of the Diffs that implemented Compact Proof Requests:

Once the Compact Proofs Requests facility was created, the most important place it is used is during the bootstrap phase. This is when a node isn’t yet running the Avalanche protocol, but needs to find the state of the network to be able to start polling. The bootstrap problem is not easy to solve. In the eCash Avalanche implementation, one of the things voted on using Avalanche polling is the Proofs themselves. It’s important for the network to maintain a stable quorum (set of participants), so it makes sense to use Avalanche to vote on Proofs in order to agree on a stable set. But the startup process presents us with a chicken-and-egg problem: We need a stable quorum to start using Avalanche, but we want to use Avalanche polling to maintain the quorum.

A simple idea would be to simply hard-code a list of nodes to connect to to obtain the initial state. In fact, as far as we understand, this is actually what AVAX does for its bootstrap. But because eCash also has a Proof-of-work blockchain in addition to Avalanche, we can leverage this to provide a good initial state for Avalanche. The node will first do the normal Initial Block Download (IBD), and sync to the heaviest PoW chain. Then it will use Compact Proof Requests to ask for Proofs from all the Avalanche-aware nodes it is connected to. Then, once it has reached a good threshold of stake amount and number of connections, it activates Avalanche.

What this all means is that the eCash Avalanche implementation is completely trustless and decentralized, with the following security characteristics:

Note that these security assumptions are equivalent to those used in the current Nakamoto consensus.

In addition to the Compact Proof Request capability, there were many other improvements to the Avalanche implementation in the last few months. These improvements were made by repeatedly testing the software, searching for problems, and then fixing them. In this way, iterative improvements are made, and we can test how the software works in a range of realistic scenarios, as well as unlikely “stress test” and attack scenarios. Live testing is very valuable, as it can reveal issues that are difficult to capture with unit tests, especially when it comes to the interaction of different parts of the system, or networking between different nodes. Over the last several weeks, these tests were typically conducted every two or three days, with rounds of improvements in between.

Some of the improvements made through this process are listed below. Note that the number of Diffs is too large to list here, only the more significant ones are highlighted. For a more complete picture, feel free to check out commits on the Bitcoin ABC Github.

Using a fast consensus protocol to do Pre-Consensus has been a long-standing item on the eCash Roadmap (and previously on the Bitcoin Cash roadmap). This is one of the improvements needed to power eCash to be a competitor and alternative to Central Bank Digital Currencies (CBDCs). When the Avalanche whitepaper appeared in 2018, eCash founder Amaury Séchet, and the Bitcoin ABC team, recognized that this new protocol was what they had been searching for, as it fulfilled the needed requirements.

It should be noted that eCash’s Avalanche implementation is completely separate and distinct from the AVAX Avalanche project. They have no connection, other than both using the protocol described in the Avalanche whitepaper. In the case of eCash, Avalanche consensus is used for fast and live consensus needs, such as fast transaction finality. Proof-of-work based Nakamoto consensus is retained where it is superior, providing objective consensus criterion to enable decentralized node bootstrapping.

Adding the Avalanche protocol has been long and technically challenging work. It is an entirely new consensus protocol which had to be implemented from scratch by the Bitcoin ABC team. While there are still many steps remaining to realize the full benefits of the Avalanche protocol, the upcoming launch of Post-Consensus on the eCash mainnet is a significant achievement, and a solid foundation for further enhancements to build upon.

For more info and to monitor development progress, see Avalanche.cash.